The Brief Adventures of Lucia and Emily in China

These past few weeks with Lucia have been some of the best since I began my new life in China. For one, it’s always great to have close friends around. And second, I haven’t laughed so much in months! Too bad the expression “time flies when you’re having fun” is true because she’s gone now.

Between our time in Beijing, we spent 9 days in 3 other cities — Hong Kong, Yangshuo and Guilin. For budgeting purposes, we took trains, buses, and a boat between cities, totaling 66 hours of travel time. It was definitely not a trip you take with a difficult person or a person without a sense of humor. Lucky for Lucia, there wasn’t a moment that I wanted to kill her, except when she ate all the Ferrero Rochers.

One thing I love about traveling is eating as much as I want without worrying about weight gain. In Hong Kong where my mom has excellent connections (the kind with $$), Lucia and I were treated like princesses. We had our own driver, Willie, and we ate like Greek gods. Buffet-ing, dim-summing, seafooding…I literally could not have asked for more or I would’ve keeled over and died from overeating. In Yangshuo and Guilin, no longer royal, we gorged on street food and noodles while avoiding horse and dog meat. The ramen, chocolates, cookies, tea eggs, chips and McDonald’s we ate on train/bus/boat rides were just food for survival.

How did all this food digest you might ask? Well, the 5.5 hour-long bike ride through the countryside of Yangshuo certainly helped (the most exercise either one of us has had in light years). Racing through Ocean Park in Hong Kong and aimlessly wandering around rainy Guilin also made a difference to my digestive track.

Princess Emily having breakfast in Yangshuo.

Instead of boring you with all the nitty-gritty details of my trip, I’ll just tell you the highlights of each city. You’re welcome.

Far beyond my expectations, this city is just perfect. From the movies (like Rush Hour 2) I thought Hong Kong was just another city. But OH MY WORD the views were incredible!

The jade-colored water between the green hills and the wild monkeys with pink butts and nipples and mansions on hilltops and flowing traffic and random temples spotted throughout the city and beaches, all in one small place. It is a perfect balance of nature and city, traditional and contemporary. Though Hong Kong is known to the Chinese as shopping-haven, Lucia and I preferred the spectacular views and roller coasters. I must admit the most memorable part of Hong Kong, besides the food, was Ocean Park, an amusement park on a hill. We had so. much. fun. 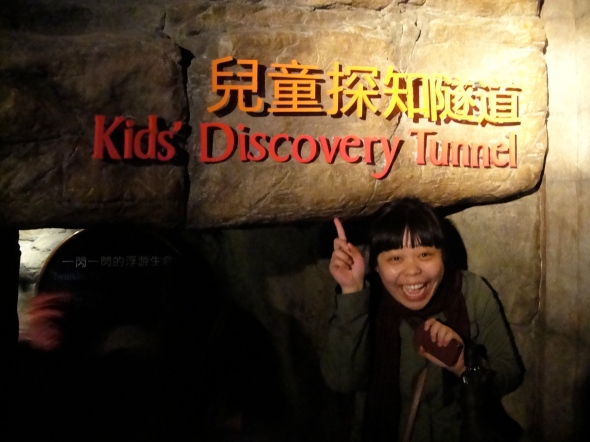 Next up, we took this pimped out sleeper bus which blared house music 8 hours to Yangshuo:

This was my favorite part of the trip.  When we stepped out of the bus, half-asleep and worried we’d left something behind after scrambling out of there at 5:30 in the morning, we looked up to find that we were surrounded by pointy hills (karst peaks). 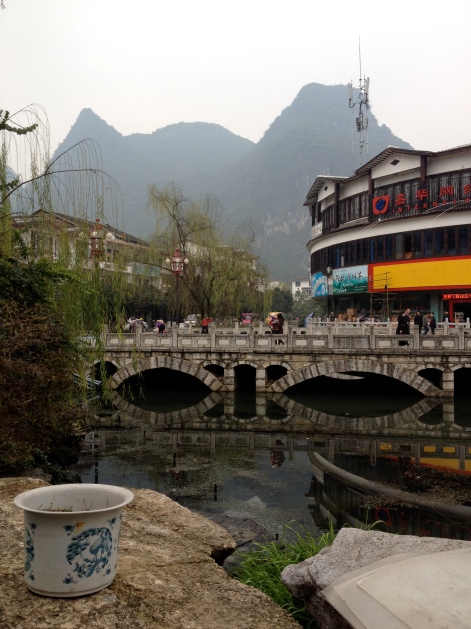 And that’s the center of town! Can you imagine what the countryside looks like?! Well you don’t have to. Just look below!

Those hills plus the Li River equals stunning scenery that is rural China. 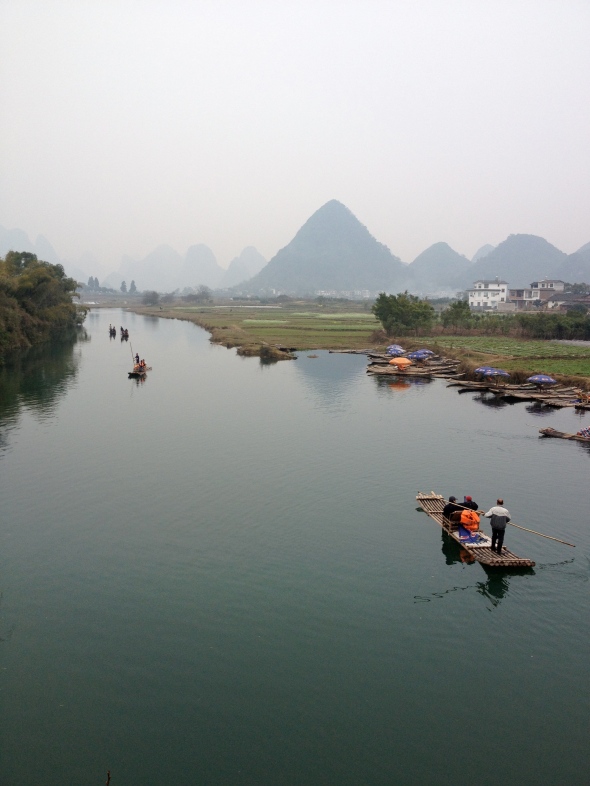 Because it was early March when the rains and fog are amidst, there were far less tourists than normal, much to our advantage.  Lucia and I could ride our bikes for miles and miles without having to share the road with other tourists. We didn’t take “the road less traveled” — we followed a Lonely Planet route — but it was still the best ride of my life.

As Lucia and I were biking through one of many farm villages, Lucia’s impossible shoelaces got stuck in the gears. It was a heaven-sent pause because out came three little girls running towards us and plopped down with books and pencils in hand. Knowing me, a teacher, kid-lover, and Ms. Emotional-to-anything-slightly-moving, Lucia had to tell me not to cry at the sight of this absurd cuteness. The girl in the middle was reading her English alphabet picture book upside down!

We were also greeted by other kids yelling “HELLO! HELLO! HELLO!” most likely at Lucia, who’s white, but I yelled back too. At one point we took the wrong road and geared off to find a pretty elderly lady with two long grey braids sitting on a bamboo raft by the river as her cows grazed the field nearby. I asked her for directions but it was difficult to understand the local dialect so she walked us to the correct path. She was a beautiful lady, inside and out!

We spent the rest of the time in Yangshuo strolling around and taking in the surrounding beauty. Two days later we were off to Guilin in a boat carrying Chinese and foreign tourists up against the currents of Li River. Along the way, we passed picturesque and widely photographed landscapes. While Lucia spent most of the ride with her nose in Jane Austen with throbbing heartaches for Mr. Darcy, I got wet taking a million photos of the passing views.

Four hours and two bus rides later we were in Guilin.

Well, because Lucia and I were all boated-out, we decided to stay away from the highly regarded boat tours. Instead, we spent most of our time eating and wandering the city center, but our day and a half in Guilin dragged on because of the bad weather. This was the least exciting part of the trip because, surprisingly and much to my disappointment, it was just another city with not much to see except the Sun and Moon Pagodas.

Lucky for me and Lucia, we only had to share our cabin for half the ride back to Beijing, except we arrived 2 hours late in the middle of the night to freezing cold and sleet.

The train cabin we shared with 4 other rotating people from Beijing to Hong Kong.

That was my trip in a nutshell. I have much more to tell and show you, but I’ll save it for another time.

Overall, Lucia and I had a fabulous time and I’m sad she’s gone. But I have many good memories and photographs to prove it. I will definitely return to Hong Kong and Yanshuo in the future, but I’ll wait till the weather is nicer. And for you to get here. Anyone up for a 28 hour train ride?