The people of Guizhou province are the friendliest, most hospitable and generous individuals I have ever met in China. This observation is even clearer now that I’m back in Beijing, where everyone snarls at one another. Could be southern hospitality like in the States, though I wonder if I’d ever feel comfortable enough to ask a stranger to use their toilet in Texas…Probably not.

I was hiking down a hill toward a small village in Langdong when typical bouts of stomachache set in — bathroom emergency. The first house my friend, Yoyo, and I came across we asked to use the bathroom. Not only did the grandfather agree to let me let my bowels loose in his home (excuse the graphics!),  he also provided generous amounts of toilet paper!! This, being in a place where public bathrooms still charge tourists and everyone carries toilet paper on them at all times (except me because I always forget)!  I was so grateful I didn’t even mind the snorting hog in the next pen.

On my way out, the grandfather invited me and Yoyo to stay for breakfast with him and his grandson. We courteously refused — we wanted to witness the process of making handmade tofu at another home in the village — but we sat for a little while. 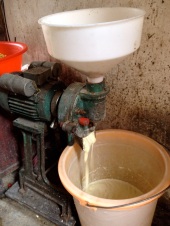 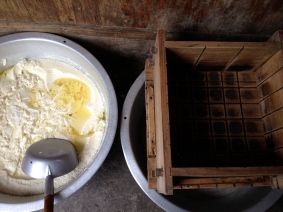 I was invited to “sit a while” by numerous neighborly strangers throughout Guizhou. I experienced a similar kind of welcomeness in Morocco where I was constantly invited to have tea and stay for free  in peoples’ homes. Sometimes yes, the hosts had intentions of making money. But in one of China’s poorest provinces, how could I not buy the handmade batik (wax art on cloth) that the nice lady overcharged my American companion for and then for which she offered me a “local” price? Especially after she voluntarily showed us around her ancient stone village?

Though Guizhou is home to many ethnic minority groups, I spent most of my time in Qiandongnan Prefecture where Miao villages are predominant. We saw people, most noticeably women because of their dress, from other minority groups such as Dong and Gejia, but most were Miao (Hmong).

When I told a Beijinger that I spent time in Miao villages, she remarked that Miao women are very beautiful. It’s true. Miao people have different features from Han (the majority–I’m Han). They have big, deep-set eyes and creased eyelids (now available via a simple surgical procedure), and their skin is darker from the powerful southern sun. Their costumes vary from region to region, as well as by age. In Huangping, for example, older women wear plain, bun-shaped hats while younger women wear more colorful ones. Old women just wrap towels around their heads, and instead of flowery garments, they wear undecorated royal blue robes. In Kaili, Leishan, Langde and Xijiang, women wear their hair in buns on the top of their heads, often supported by black yarn to resemble more hair. They decorate their hair with fake flowers and colorful pins and a special comb, but with different details from village to village. 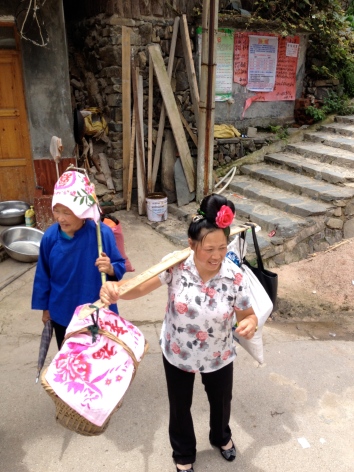 And how ’bout this fine gentleman sporting a Soviet winter hat in the middle of summer?

Whole elaborate outfits are only worn for festivals. Women spend lots of time and money — often thousands and thousands of Yuan — embroidering, sewing, pleating and decorating these garments by hand. A small piece of hand-embroidery is worth hundreds, even thousands, of Yuan because it is so meticulous. 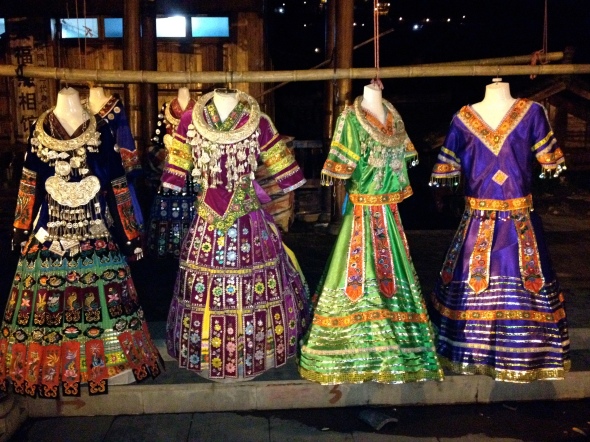 The silver they wear around their necks, on their heads and in their ears weigh a lot.

But silver is believed to cast away evil spirits, so people always wear it, most often as a bracelet. Naturally, I bought one for myself.  I like to think that the silver not only protects me from evil, but also connects me to Guizhou.

It’s a relief to know that there are still people in China who are kind, un-abrasive, patient, and honest. I’ve been in Beijing for 3 days now and already feel anger and frustration in the pit of my stomach because people here can be so cold, which is ironic because it’s steaming outside.

Two hours outside the city center is Mount Baoding, one of two mountains in Dazu County (I wrote this incorrectly in my last post), a World Heritage Site (checkin’ it off my bucket list, oh yeah!). On the mountain are Dazu Rock Carvings of Buddhist, Taoist and Confucian influence from the days way before yore. People back then obviously had a lot of time, patience and unmatched artistic abilities as they were able to produce these magnificent sculptures and carvings. Here’s what I’m talking about: 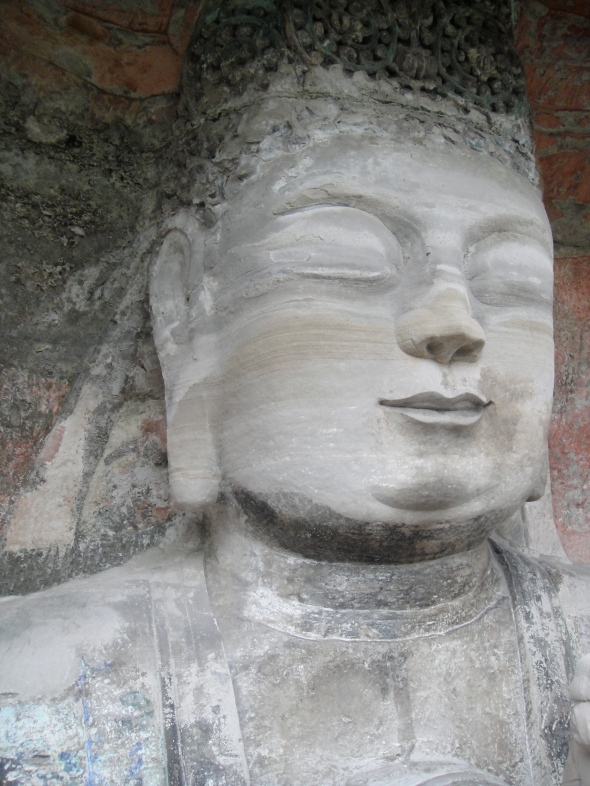 Guanyin and the Thousand Arms

The rock carvings are some of the most unbelievable things I’ve ever laid eyes on. It’s amazing to me that something from centuries ago (7th century AD to be exact, thanks Wiki) can still exist.

Dazu county, besides the mountains, is known for its quality knives. Many modern rock sculptures–lions that guard banks for example–are also made here. I guess the skills from sculptors of the Dazu Rock Carvings were inherited by today’s Dazu residents; it’s in their blood.

Not quite as old as the Dazu Rock Carvings is Longxing Ancient Town, which I dub “Mahjong Heaven.” Despite it being a tourist attraction, fortunately still a minor one, my walk through the old alleys felt more like a stroll through the locals’ neighborhood. People hung out everywhere–a girl washing her hair in a bucket on her doorstep, kids running around being kids, all the cafes filled with people playing mahjong, clothes drying outside, the elderly on break from mahjong resting on benches chatting away, vendors selling goods at their front door. It is the friendliest, most bustling and homey town I’ve come across in a long time, perhaps because it is small. But actually, in general Chongqing gives off a friendlier vibe than Beijing. Maybe it has to do with the climate. Colder weather, colder people? Warm sunshine, warmer people? 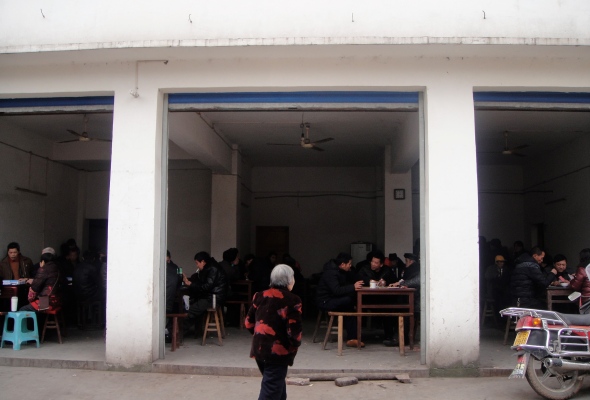 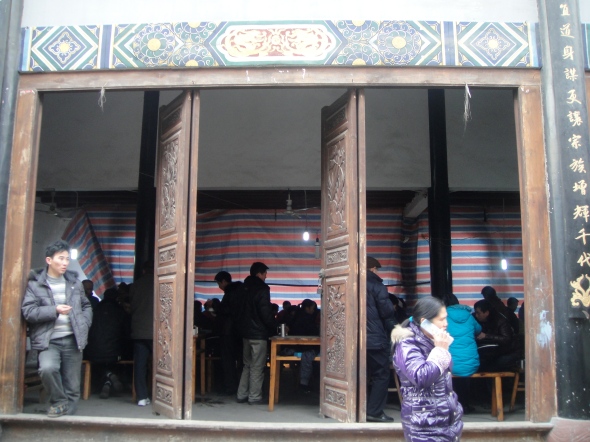 Longxing used to be farmland, but the Chongqing government in its endeavor to develop the city bought the land (I believe for a fair price) and began building it up. My aunt says the reason people there have so much time to play mahjong (aside from it being Spring Festival) is because these former farmers have no more land to cultivate, and also because they are much better off than when they were farmers (they now run all the small businesses in town). My aunt also says in 10 years this part of Chongqing will become the next most developed area of the city. If this is so, I’m glad I got to visit Longxing before the streets become crowded with tourists.

We bought two chickens from him. (Is that a beer in his hand?! I just noticed this! I've been noticing a lot of new things in my photographs since this new WP theme displays HUGE photos!)

Here they are! (Sorry chickens, but you are guaranteed fresh. I hope you have a better afterlife.) 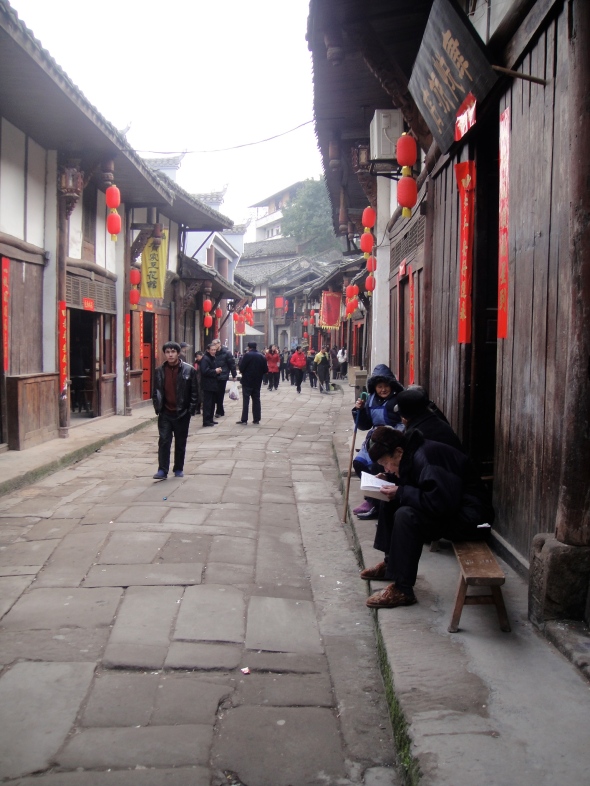 This little one's got the blues.

and this little one is pooping in the street hehehehe (I didn't notice the poo under her butt until I uploaded this photo!!)

The Elderly Have it Good

The Chinese elderly, like children, always seem to find things to do. And they have so much fun doing it! With public parks scattered throughout every city and courtyards in every neighborhood, all you need is a few pals, a thermos of tea, some playing cards or mahjong, some music, and you’ll have yourself a ball!

Dance of the Red Fan

Some prefer to just sit around and chat.

While the folks above are having fun, others still have to work. 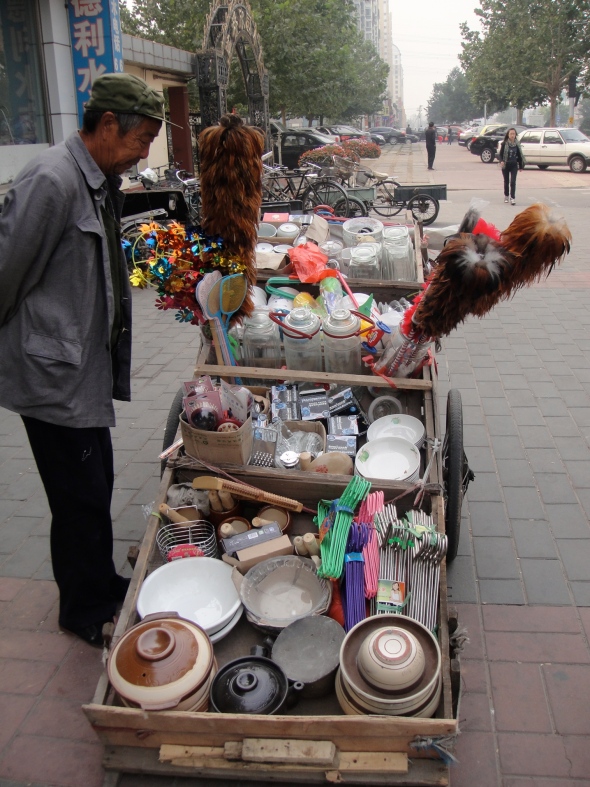 When the retirement age is 55, what else are you going to do?

As usual, I caught people in action at The Table.

I decided I didn’t like the previous name I gave the table, “The Table of Life.” It may have religious connotations I did not intend. Therefore, I want to give it another name, like “The Friendship Square” or “Table 90210” (but that’s just silly), or maybe even “The Pit Stop.” I don’t like any of those names. Any suggestions?

Also, I have plenty to blog about – my new job(s), photos, IKEA, another concert, babies – but I’m too pooped to do so right now. Stay tuned!

Early this morning at the Table of Life 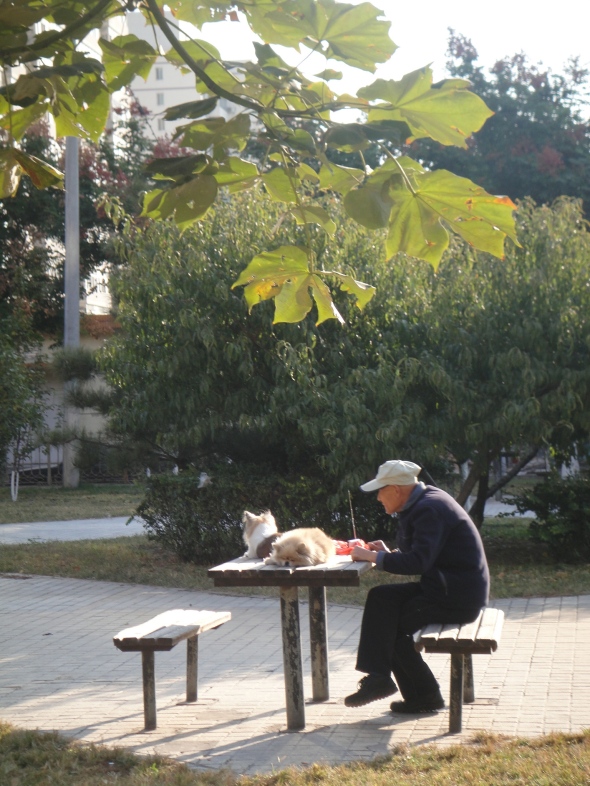 Before I took the photo, this elderly man had his ear to the radio (you can see the antenna poking out behind his hand) while his dog(s) stood guard — one fell asleep. This was 8:00 this morning. I wasn’t lying when I said there is always someone at that precious table.