The reason I haven’t been posting/commenting/liking/responding to anybody is because I’ve been busy doing this: 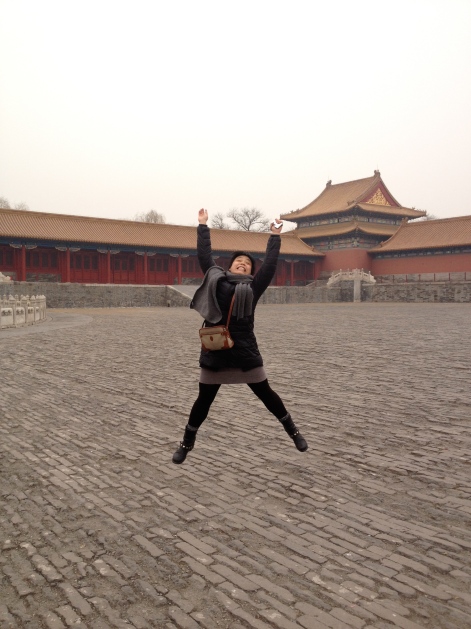 Jumping for freedom at the Forbidden City, 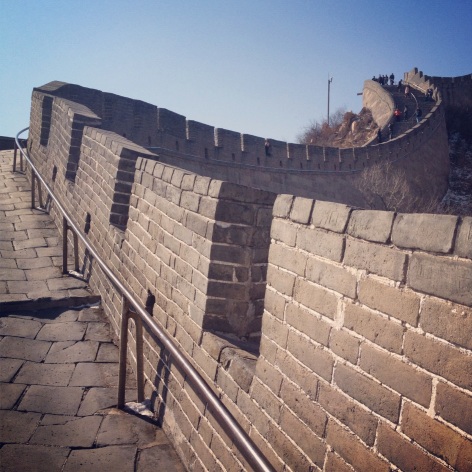 getting my exercise on at the Great Wall, 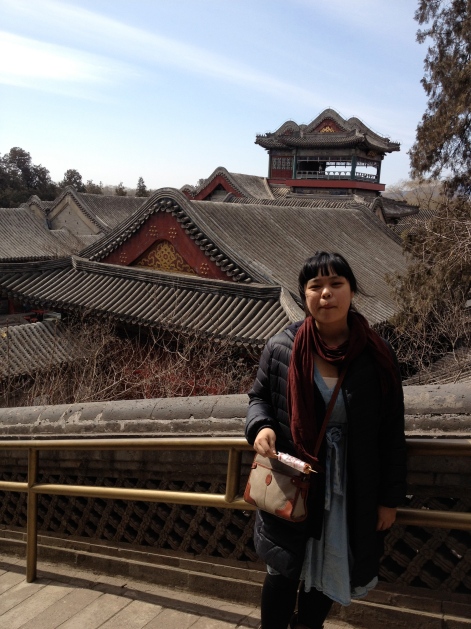 curing my sweet tooth at the Summer Palace, 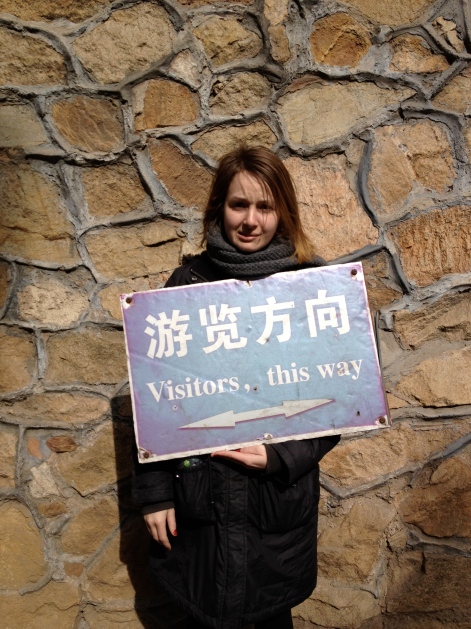 (not) getting lost with my best NYU-comrade (Lucia's visiting from Americuh), 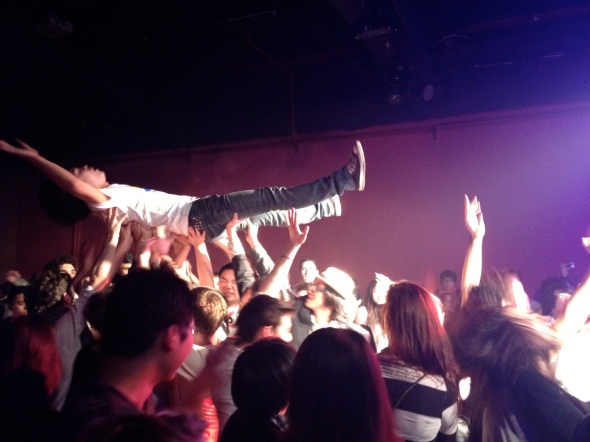 and crowd-surfing at Chinese "rock" concerts. Just kidding. That's not me, but next time it will be.

Anyhow, Lucia and I will be off to Hong Kong (29 hour train ride) tomorrow, then to Guilin (23 hours back), my momma’s birthplace. We’ll be back in 9 days, simultaneously pooped and refreshed!

Until then, my friends, as the 13 year-old-boy I used to AIM chat with said, “Love, peace, and hair grease”. 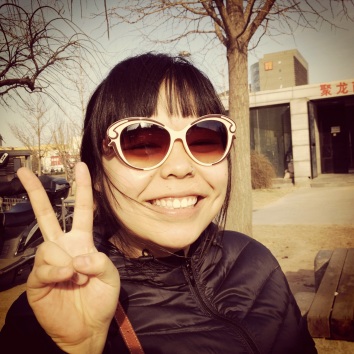 (Like my new shades? Got ’em today during our crazy shopping escapades which I’ll get into later!)

In more exciting recent news, I had friends visit last week! My new friend Zach, to whom I was introduced in Brooklyn by the lovely Kelly, and his girlfriend Anastasia took a week-long trip to Beijing. This is us with Dingding at the DJ Shadow show: 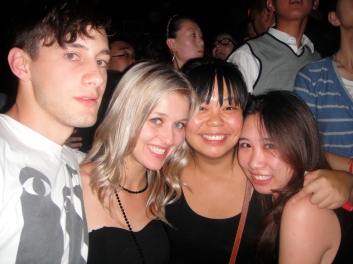 I hope they don’t mind I posted this picture…. eeks! Dingding will never know.

A few days later Zach and I went to see Carsick Cars, a Beijing-based rock/pop band at The Old What? Bar located at the west gate of The Forbidden City. The bar was cozy with a nice balance of foreigners and local youth, with regular New York prices. Below are some blurry photos of that sweaty experience. 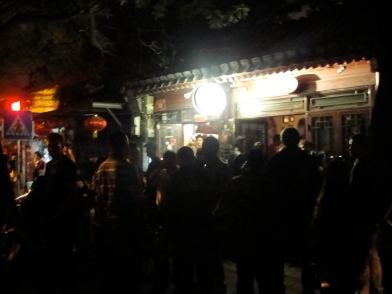 The Old What? Bar

An usual location for a bar, especially when the policemen at the end of the long street told me there were no bars here. That must explain why when the show ended, a ferocious employee shooed us all outta there and insisted that we knew nothing (nothing about what?!). Maybe I wasn’t supposed to write that, or post the pictures of what I saw. Oops! 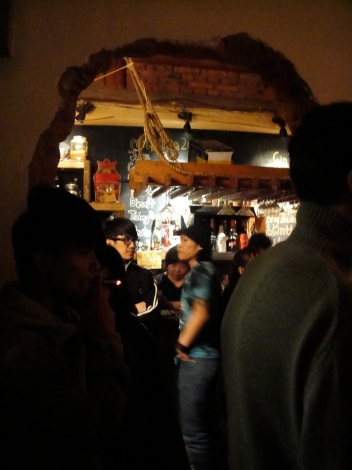 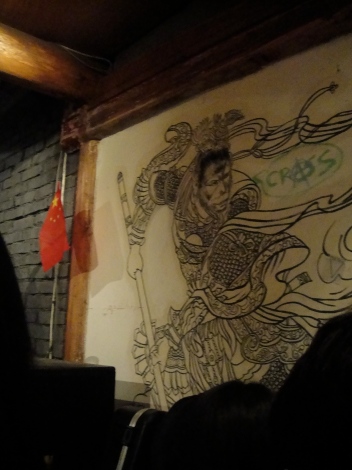 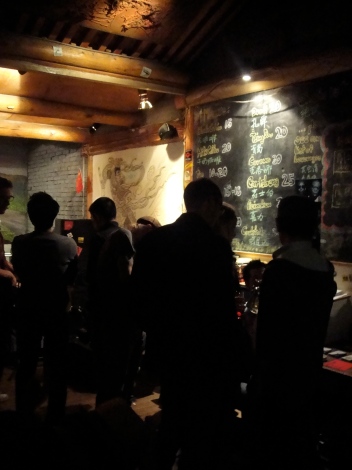 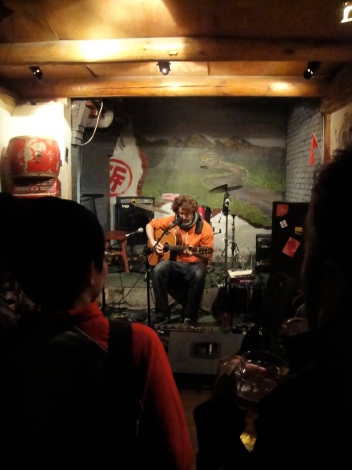 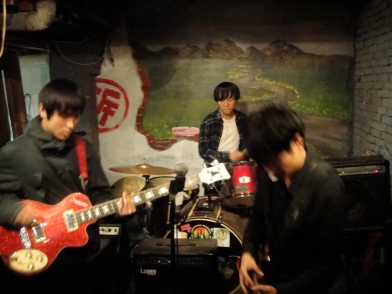 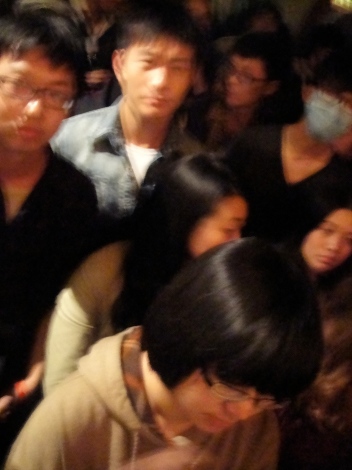 I didn’t capture any foreigners in this photo because they were all standing in the back or on the sides. Carsick Cars were obviously a local favorite. Must say though, it felt like home being around so many foreigners. It also felt good to be able to converse in English, however, I think after a month of purely speaking Chinese, my English is already dwindling. What kind of English teacher am I?! I should teach Chinglish instead. I’m an expert. 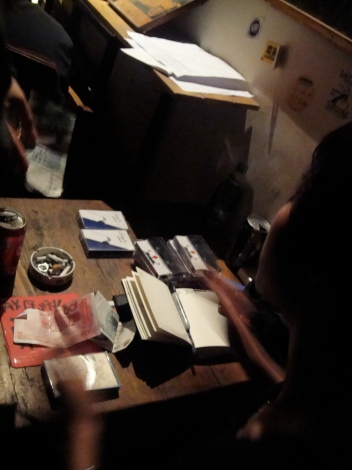 Carsick Cars were selling cassette tapes of their music! Yay for old-school, except I don’t  have a tape player at home…The last cassette I owned was Shania Twain’s.

The best part of the night was while Zach and I were getting fresh air and noting how life-threateningly fast the accordion buses were whizzing down the narrow road, we saw this fella across the street practicing martial arts Mr. Miyagi style.

On my way home, oh wait. None of the cabs would drive me home because I live so far from the center of the city. I had to hop in Zach’s cab and drop him off first before the cabbie would drive me. And during that ride, burning my heart and soul, he had the nerve to make fun of my Chinese! Gosh, my English is dwindling and my Chinese is barely improving. I guess I should start writing a Chinglish dictionary.