I just gambled away a small fortune (in Yuan, so divide that by 6.2 and you’ll have an even smaller fortune in $$) in Macau. Don’t judge me. I’m just trying to assimilate. 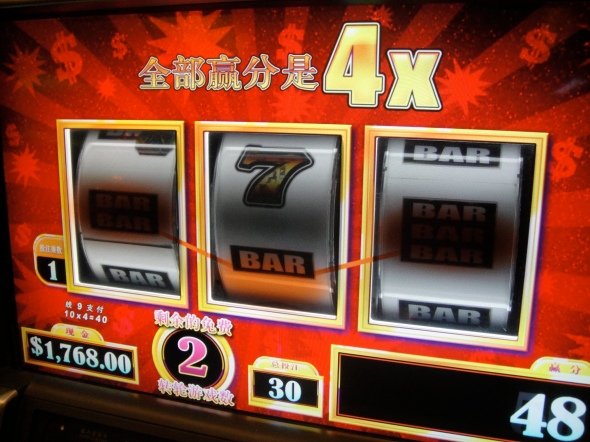 My 90 days were up on my visiting visa so I had to make a reentry into China. Macau, one of China’s two “special administrative regions” in Southeastern China (the other is Hong Kong), was a close getaway so there I went for two nights with my parents. We stayed at The Venetian, a fancy hotel casino for a fancy lady.

It was pretty astounding to drive around this little city on a peninsula scattered with towering casinos. It was also pretty bizarre. Macau was a Portuguese colony until 1999, when it was handed over to China, but most people speak Cantonese. I couldn’t figure out who were ethnic Macanese (Portuguese descendants) because the city was overrun with tourists, mostly from the mainland. There were also a few Russians, several Indians, some Europeans and groups of young Americans–the most diverse atmosphere I have encountered since my trip to the Maldives. I’m not talking ethnically diverse, though, because if I were, mainland China is definitely most diverse.

The historic centre of Macau is a UNESCO World Heritage Site for its symbol of an east-west relationship as it is the oldest international trading port. The city’s architecture is a blend of Portuguese, Chinese and contemporary Western influence (huge-ass casinos), with Chinese and Portuguese on every street sign. Walking through Largo do Senado (Senado Square), I was actually quite reminiscent of my days in Europe where buildings are small, pathways are narrow and cobblestone, and windows have shutters. If there hadn’t been so many Asian faces, people in general, Chinese store signs and undergarments hanging from windows, I would’ve thought I was in Europe. Sort of.

Near Largo do Senado rests the Ruins of St. Paul’s, a 16th century Portuguese cathedral, the largest in Asia at the time but one of several churches throughout the city. Aside from the casinos, this area around Largo do Senado was all I saw in my day and a half in Macau.

One thing I did enjoy immensely about Macau, besides the multicultural architecture, was the food. I tried Portuguese oxtail which was okay–too sweet–and their most popular pork chop sandwich–a thin filet of deep fried pork chop tucked between two buttered toasted buns. But Chinese-Macau food, I believe similar to Hong Kong cuisine, was the bomb, and thanks to my uncle’s superb connections, I got to try some of Macau’s best and most authentic cuisine. With seafood so fresh I forgot I had allergies. From meaty sauteed crab with bitter melon and Hong Kong style dim sum, to salt and pepper prawns and Macau’s special hot pot, it was an Asian gastronomer’s dream come true.

If you asked me to visit Macau again, I would definitely go just for the food. As for gambling? I can do without.

There is an entire street of jewelry stores