The People You Meet →

Dreams of a Beached Cow

Posted: February 18, 2014 | Author: Emily He | Filed under: India, The World, Travel | Tags: beach huts, beached cows, dreams, Goa, India, palolem, sunsets, travel |4 Comments
It was a dream — waking up and going to sleep to the slap of ocean waves, over-hydrating on fruit juices and cocktails, roasting under the sun next to thonged Russians, and silent disco-ing until dawn. It was a dream I was not at all ready to wake up from.

My last 10 days in India were spent on the beautiful crescent beach of Palolem in Goa, living in a beach hut 50 meters from the Arabian Sea. It was the epitome of relaxation and laziness, but also of rest and appreciation. Rest from the past 6 weeks of moving from city to city with a giant backpack. And appreciation of the coconut trees that lined the beach from one end to the other, the moon that glistened and lit our path home every night, the young chatty seasonal workers that came down to Goa for 6 months and up to Ladakh for another 6, the dogs that lounged by day and loyally guarded their territories by night, the sea of attractive half naked European men, and most of all, appreciation of how privileged I am to have had 10 days as a beached cow.

Every evening, Feven and I watched the sun set between two islands. By then, the moon would already be hanging above us, ushering us into yet another night of sipping down cocktails and dancing, before the sun would rise again to warn us that dreams were not forever.

I wish I had taken more photos, but when you live somewhere, you don’t feel the need to capture what you see everyday in photos. That teal hut, with its maroon walls, tarp ceiling, and cracked floorboards, was my home; I lived there. And that stretch of beach was my backyard. Waking up just before noon to walk a few meters to Royal Touch for brunch before finding my beach umbrella a few feet further, and a few feet from the Arabian Sea, was my morning routine. Around sunset Feven and I discussed where to have market price fish tandoori — at the movies or right on the beach? By nightfall, we were dancing the night away with the Swedish folks that apparently frequent Palolem. Following this routine forever might get redundant, but another month wouldn’t have hurt. Not one bit. 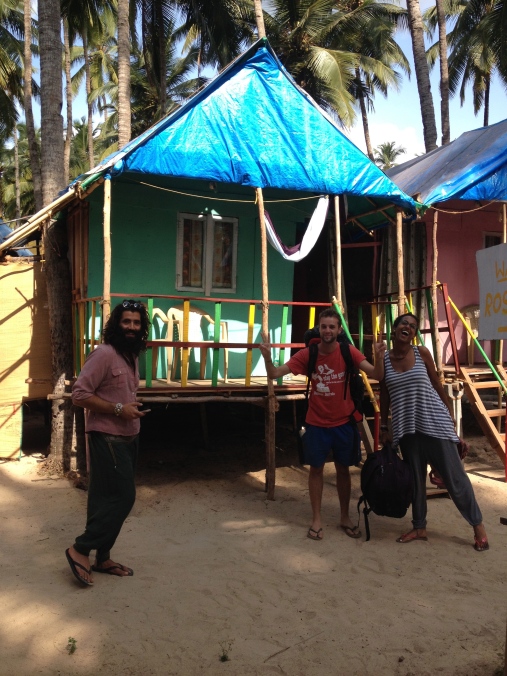 I am now as dark as the Cadbury chocolate bars Feven and I ate once a day as fuel to keep going. I am also peeling, writhing out of my old skin and into a new, refreshed and wiser skin. Whenever I look into the mirror and see nothing but the white around my pupils and bikini-covered areas, I think of all the purely good fun I had in Goa. I am also reminded that no dream is ever too big, that if you wanted to be a beached cow for 10 days in Goa, you can make it happen.

4 Comments on “Dreams of a Beached Cow”